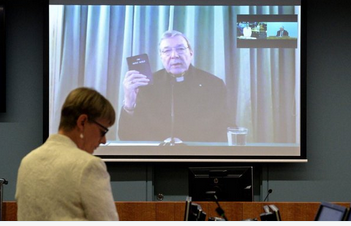 Counsel Assisting, Gail Furness: “I have to say Cardinal that your testimony is entirely implausible.”

‘Where’s the spirituality in all this?’ asks a pale, middle-aged man who was sexually abused by clergy when he was a little tyke. It is a rhetorical question. After a lifetime of no answers, he expects no answers. The man next to him—who says he would rather meet the Dalai Lama than the Pope—will never forget when he was first forced onto a priest’s penis. (His words). He was 10.

These survivors are in Rome at the Hotel Quirinale, minutes from the Trevi Fountain, to witness a special sitting of the Royal Commission into Institutional Responses to Child Sexual Abuse in Australia.

The Commission has so far heard from 5,000 victims.

Over four hand-wringing nights, they listened to the CEO of Big Religion in Australia, Cardinal George Pell—Number Three in the Vatican—display the sophistry, feigned concern and deft footwork that allowed pedophile priests to ruin untold young Catholic lives with impunity over decades and centuries. 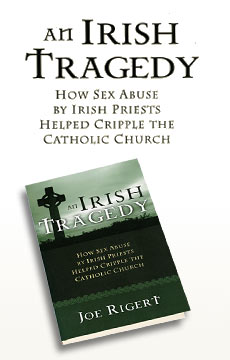 In the beginning was not The Word. In the beginning was The Silence. That’s how it happened. It was a time when there was, by tacit agreement, scant language to speak of child sexual abuse, so a predator became, for example, “a difficult customer” – as  Pell repeatedly described the child rapists in his testimony, given by video link.

We heard Pell agree how when a 12 year-old boy told him  in 1974 that Brother Dowlan was sexually misbehaving with other boys, he said nothing. Did nothing.

We hear testimony about another predator priest in Pell’s old diocese of Ballarat, the repulsive Father Peter Searson, who knelt little girls like Julie Stewart between his knees in the confessional. He had a tape recorder, but Pell chose to believe Searson when he said it was for playing hymns, in the confessional. This psychopath threatened to stab one little girl; he tortured a cat and repeatedly stabbed a bird in front of children.  He bullied and bashed the boys. There may have been blow-jobs and buggery. That’s the language Cardinal Pell.  The language you need to use to break the silence around  those  you call “difficult” people.

Eighteen teachers wanted Searson dealt with. Two delegations of parents and parishioners went to Pell when he was an auxiliary bishop. All in vain.

He was even appointed as a chaplain to the blind.

Language-wise, another allegation about Pell concerns the monster Gerald Ridsdale, a serially abusive priest with whom Pell once lived and whom Pell supported, publicly, when he was tried for crimes against children.  At a funeral, Pell was heard to say to a fellow priest , ‘I think Gerry’s been rooting little boys again’.

Pell denies he said this.  The former altar boy swears he did. No one had the tape recorder running, sadly. (Ridsdale, who admitted abusing at least 53 children between 1961 to 1982, was jailed for an extra eight years in 2014 after new victims came forward).

In the 1970 and 1980s, feminists understood what must be done to expose rampant child sexual abuse in our homes and schools. We designed our early campaigns around ‘Breaking the Silence around Sexual Violence’.

Pell meanwhile is unrepentant.  He insists he was “deceived” by his fellow senior church leaders, “deceived” by the Catholic Education Office,  deceived by everybody – except perhaps for that little boy who blurted out that Brother Dowlan was sexually misbehaving. He didn’t deceive Father Pell. No, he told the truth. Like all the little children. Ted Dowlan  went right on sexually misbehaving. There were suicides before Dowlan was jailed for abusing 20 boys.  Lives were shipwrecked. Families destroyed. All in the shadow of the Cross.

They crept around unmolested under the cover of silence, these senior Churchmen like George Pell, sheltering under cannon law like rock spiders;  putting the welfare of predatory priests ahead of innocent children lest muck stain the good name of the Catholic Church.

But as Kenny says of a particularly filthy toilet, ‘There’s a smell in there that will outlast religion.’

What was the church’s theology around children in the 20th century?  Same as the first century, or the 10th or the 18th I’m afraid. The church’s actions in Australia and globally plainly show that children were collateral damage when it came to protecting  the reputation of the church. No contest. The presbytery was a safe harbour for pedophiles for hundreds of years. Why not today?

Pell was complicit or incompetent—or worse—he was incurious.  Like he said in his evidence, Gerry Risdale’s was “a sad story that didn’t  much interest him.”

He had other fish to fry.

He was ambitious for Rome. For high office. Today he has his cherished Vatican Passport. He is untouchable.

Back in the Hotel Quirinale Cardinal Pell is uncomfortable.  Tired. He tells the press he  is the victim of “a witch hunt”.

Except witches didn’t get to go home to bed in their luxury Vatican apartments after trial by Skype. Witches  were tortured, drowned and  burnt alive by the Catholic Church  in their hundreds and thousands.  Some say millions of women died over three centuries of witch hunts in a time Cardinal Pell would call The Renaissance.

The priest ridden Middle-Ages that has  yet to  produce an apology to women is the backdrop to the systematic global sexual and physical abuse of children. There is not one memorial to the women they murdered as witches. Never mind an apology.  It is offensive,  insensitive  and unseemly for a a Prince of the Church who succoured pedophiles to say he is the victim of a witch hunt. He should resign.

Hotel  Q in Rome might become  a sacred site for survivors of sexual abuse. A new pilgrimmage.  It was the place 10,000  miles from home  where the world  finally listened to survivors after they had been waiting decades for their voices to be heard, their accusations to be believed.

Graffiti in Lisbon, breaking the silence.

What is on trial in the person of  Cardinal Pell is the church’s response to these cries for help— unwritten protocol to protect abusers—The Pell Protocol:  Move them around. Use smoke and mirrors. Write nothing down. Do nothing. Say nothing. Disbelieve. Dodge. Disavow.  That was the strategy.

Pope Francis needs to “see” the murdered witches and sexually abused children. They  are howling through eternity. They  are howling around the Vatican.  They are throwing coins in the Trevi Fountain and making wishes. As one broken man said, “never underestimate broken people”.

This blog post completes for me a journey began over 30 years ago in  Adelaide  when I co-wrote with Andi Sebastian the first major  report in Australia on Child Sexual Abuse, as we named it.  The then  landmark study  was published in South Australia by the SA Minister for Health and endorsed by the influential Institute of Family Studies. It was controversial in suggesting that as many as one in four girls were being sexually abused.  It also showed the short and long term effects of sexual abuse were terribly serious and debilitating.

It  was shadowy men like Pell who, in those dark days, had kept me awake at night. The enablers. The obsfucators. In politics, a powerful man knows he can always be asked the most dangerous question of all: ‘Who knew what,  and when’. So he is kept in the dark using a strategy of ‘plausible deniability’. I know nothing.

Or the Sgt Schultz  Defence, as it has been called.

One of our key recommendations in 1984 was to make it unlawful  for authorities like the Catholic Church not to report suspected child  sexual abuse to police. What a bunfight!

I suggested years ago sexual abuse of children was systematic in the Catholic and other churches. I was reviled for my remarks.

I grieved then for my puny efforts in taking but one brick from  the wall of silence.

I am dying, yes. But in my 60th year I have lived long enough to see a Cardinal answer his accusers. Or, not answer them. I have seen Child Sexual Abuse by clergy dragged to the very gates of the Vatican,  Cardinal Pell our unwitting Trojan Horse!

‘What would Jesus do?’ a weary survivor asks the world media gathered around the Survivors in Rome.

One shy old bushy in a leather hat says his childhood was stolen by the church because he was always frightened.

Another held up a photo of two little convent girls: “These are my girls”,  their father said.  “It is what it is all about. A Catholic priest was raping them when this photo was taken. That’s why we’ve been fighting for so long.”

I don’t know why Billy Joe McAlister jumped off the Tallahatche Bridge,

4 thoughts on “When in Rome”