A near death experience

At the height of The Cold War in 1983, Stanislav Petrov,  then a high ranking Russian military officer, was on duty at a secret bunker outside Moscow .  Three weeks earlier, the Russians had shot down a South Korean passenger airliner that had strayed into Soviet air space.

It was just after midnight when the alarm bells shrieked.  America had launched five ballistic missiles.  A red screen  flashed the word ‘LAUNCH’.

Stanislav Petrov—who was filling in for someone else that fateful night—stared in horror at The Red Button. Pressing it would end the world in a fiery Armageddon of Mutually Assured Destruction, or MAD, as it was called by the Superpowers.

Petrov,  later known as, ‘The Man Who Saved the World by Doing Absolutely Nothing’,  had a hunch—“a funny feeling in my gut,” he would later recall—that it was a false alarm; that he would be putting out the fire with gasoline. But what if he was wrong?

On that date in Australia, we awoke to the thrilling news that we had won the America’s Cup, the holy grail of yachting wrested from the USA after 132 years.  Our Prime Minister Bob Hawke declared a national holiday.

We partied hard,  unaware of our near miss with nuclear annihilation.

As the aggressive former Prime Minister Tony Abbott becomes political roadkill  in the rear view mirror of Australia, I reflect that a man such as he, an authoritarian martinet, would most certainly have pressed The Red Button in that Soviet bunker that night.

So it was with great relief this September we saw off our war- mongering clerical fascist ;  a Prime Minister of whom it was astutely said: ‘In your guts you know he’s nuts’.

Tony Abbott  kidnapped Australia and took us on a road trip back to the 1950s, where men were men,  and women ironed their shirts.

A spooky sign that  Abbott was evil incarnate came to me when family of mine were about to undertake the 1000-year old pilgrim route across northern Spain, known as the Camino. They found a painting in an ancient Gothic  church that sent chills down my spine.  For there in plain sight was another poor soul being  tortured by none other than  a Tony Abbott look-alike demon! 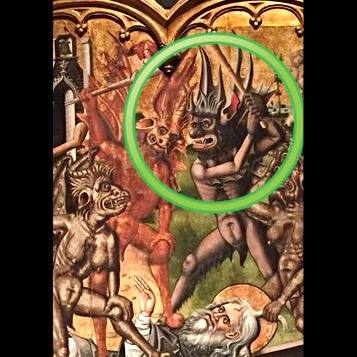 For chronically ill Australians Tony Abbott was a cruel PM.

He ripped billions out of health budgets and he created a climate of fear and loathing which was  harder  to bear as one’s life ebbs away.  He made me afraid for the future; this yesterday’s man. Exercise-mad, he was our fittest ever Prime Minister, yet totally unfit to lead.

His government characterised Australians as ‘lifters or leaners’ and everyone who is ill or old knows they’re not lifters.  All lifters were good, except for shirtlifters, because there was never ever going to be same sex marriage under an Abbott government. Nope. Nope, as he liked to tell asylum seekers in leaky boats trying to get to Australia.

Abbott, whose reptilian habit of tasting the air with his tongue,  was unpopular in poll after poll.  And so they came for him.

As the Saturday paper said in tones Churchillian:

‘He will not be missed.
He should not be praised.’

My own near death experience this month was to suffer a  massive hemorrhage  which at 4 o’clock in the morning saw me fearful of drowning in the blood gurgling up from my lungs, possibly caused by a bronchial valve eroding a blood vessel.

The ambos reluctantly agreed not to send me to hospital which this year is infested with  a record number of  flu cases after a nasty strain of the virus  not covered by the annual vaccination has caused a spike in deaths among people like me.

There was a state of stillness as I entered the eye of the tornado and where I stayed until the sun rose again.

Beside me, as always, was my beloved. Whether married or not, who  better than us know  the meaning of the vow we are not legally allowed to take: to love each other in sickness or in health; for better or for worse . . .

Also this September,  vale Oliver Sacks,  another man who would not have pressed The Red Button.

8 thoughts on “A near death experience”