Out of the blue, I received the following charming letter:

“Barbara, my dear – I hope you don’t mind, but I was in a bookshop the other day (Mona Vale has a local Berkelouw, if you don’t mind!) and could not resist the temptation. I have bought you a very small gift, that I hope I can post to you.”

It was signed with the nom-de-plume of a tres stylish and generous woman who was an ornament to the late Bob Ellis’s glittering Table Talk blog. We correspond from time to time and agree we are that oddest of things: firm friends who have never actually met.

Glow Worm,  as she called herself online, put me in mind of the twinkling caverns in the  Cathedral-like  limestone caves (pictured above) at Waitomo in New Zealand, near where I was born, and to where I returned to celebrate my 50th birthday.

The mysterious gift from Glow Worm turned out to be a pre-loved copy of The Rime of the Ancient Mariner (illustrated by Melvyn Peake). How on earth did my correspondent guess it was a favourite, or something I might even like? Curious and curiouser.

I opened the small Vintage classic in mint condition. I couldn’t believe my eyes.

There was my name on the bookplate, written in my own young hand! Forgotten. Let go at some point, only to return many years later and pay a dividend in friendship.

It joins, on my bookshelves, my treasured and tatty 1876 edition illustrated by Gustave Dore.

Okay, yes, I sometimes read poetry, which in most circles, is like admiring foot binding.

But poetry needn’t be posh or opaque to be deep and meaningful:

They fuck you up, your mum and dad.
They may not mean to, but they do.
They fill you with the faults they had
And add some extra, just for you.

But they were fucked up in their turn
By fools in old-style hats and coats,
Who half the time were soppy-stern
And half at one another’s throats.

Man hands on misery to man.
It deepens like a coastal shelf.
Get out as early as you can,
And don’t have any kids yourself.

I have indeed, as it transpires, taken Mr Phillip Larkin’s advice to heart:  No kids. And getting out early.

Many of my parent’s generation and earlier could recite rousingly by heart, mainly bush poetry such as Henry Lawson’s The Man from Snowy River,  Banjo Paterson’s The Road to Gundagai,   John O’Brien’s Around the Boree Log, or perhaps, The Highway Man, an Alfred Noyes poem often recited by my father.

The words were whispered about how the moon was ‘a ghostly galleon tossed upon cloudy seas’, how the highwayman came ‘riding, riding, riding, up to the old inn door’,  where Bess the landlord’s black-eyed daughter was ‘plaiting a dark red love-knot into her long black hair.’  Wonderful stuff.

In the newspaper announcing his death on 11 April, 1991, my father, who had left school at 11, chose, to mark his passing, a few lines  from Tennyson’s Crossing the Bar.

Sunset and Evening Star and one clear call for me,
And may there be no moaning at the bar
when I put out to sea.

Since I first read it at high school The Rime of the Ancient Mariner (1798) has stayed in my life.

I like it for seducing me as a callow school girl and for still being beautiful, haunting and mysterious as I enter my third age.  I like it not only  for its long companionship in my life  but for the door it opened in my young mind to the idea of subtext; for its  seductive watery imagery and  mystical symbols.  I like it for its moral implications, its supernatural vaudeville,  its spectral illustrations, and I like it because it seems to have  foretold my own life’s dilemma and then suggested a remedy.

As you probably know, The Ancient Mariner is the luckless sailor who has a brain snap and shoots a great Wandering Albatross.  He is punished by having the rotting bird strung around his neck. His shipmates fall down dead. He is cursed. Alone he lives on  becalmed on a rotting sea.  He shudders at the sight of the slimy snakey things in the water.

‘Alone, alone, all, all alone,  Alone on a wide wide sea! And never a saint took pity on My soul in agony.’

He cannot die, no matter how great his suffering. He cannot ease his thirst no matter that there was ‘water, water everywhere . . .’

This is the sickbed.
The deathbed. 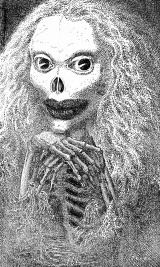 In the poem, two harridans play dice for the sailor’s soul: one is Death, the other Life-in-Death, or Chronic Illness, as I think of her— wasted and wan and smiling with a rictus grin.

What  I thrilled to then and now about The Ancient Mariner, was the idea of redemption through seeing something ugly and  afeared, like the sea snakes, transform into something beautiful and magical.

Change the way you see things, and the things you see will change, as they say.  So the curse on the mariner is unloosed when he blesses them unaware.

Finding  beauty in ‘the other’  is a powerful and contemporary message for me, even as I struggle to always find beauty in the illness I endure or the world in which I live. It is there and I count my blessings mightily. But that’s another blog.

We cannot for sport raise a bow and arrow to slaughter a bird, or bomb our way to peace. We will not see the shimmery sea snakes ‘blue, glossy green and velvet black’  for blood and gore in the water. We will grope blindly in the murk and soon die.

He prayeth best, who loveth best

All things both great and small;

A sample of Richard Burton’s magnificent rendition (sound begins at 00:50).

16 thoughts on “rhymes and reasons”