Once, when bargaining for my life, as you do, I asked the gods not to let me die while my hair was still brown. And also, I begged them, let me live long enough for someone to find the missing aircraft of my heroine, Amelia Earhart . . .

. . .  Now a  piece of Amelia’s lost plane has just been identified ‘to a high degree of certainty’ for the first time since she vanished over the Pacific Ocean in a record attempt to fly around the world 77 years ago.

Amelia Earhart was an aviatrix and poet—a rare conjunction of lyricism and daring in the one soul. In the 1930s, she advocated strongly for women’s rights. She was a close personal friend of the First Lady, Eleanor Roosevelt, and had an ‘open’ marriage to publisher George Putnam. Adored by the American public, people often wrote and told her about naming babies, lakes, and even homing pigeons ‘Amelia.’

On June 1st, 1937, Amelia flew her Lockheed Electra into the bright Florida sky, setting out on her daring attempt to fly around the world. Five years earlier, she had equalled Charles Lindberg’s feat to become the first woman to fly the Atlantic.

“After midnight, the moon set and I was alone with the stars.   I have often said that the lure of flying is the lure of beauty, and I need no other flight to convince me that the reason flyers fly, whether they know it or not, is the aesthetic appeal of flying.” 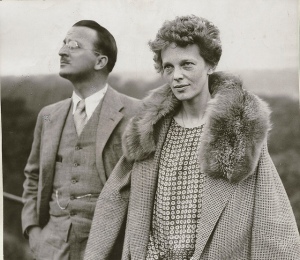 Amelia Earhart and her navigator Fred Noonan are captured on film before launching their doomed mission.

Days before she disappeared from the earth and arrived to stay forever in our imaginations, Amelia Earhart, gave voice to her wonderment and her fears:

“Not much more than a month ago I was on the other shore of the Pacific, looking westward. This evening, I looked eastward over the Pacific. In those fast-moving days which have intervened, the whole width of the world has passed behind us—except this broad ocean. I shall be glad when we have the hazards of its navigation behind us.”

On July 2 she and navigator Fred Noonan took off from New Guinea for Howland Island, a mile long dot in the Pacific. Noonan couldn’t find it and they flew on, radioing for help and running out of fuel. Even today it’s hard to spot these specks in the vast South Pacific. No trace of the plane or its passengers has ever been found, until now. 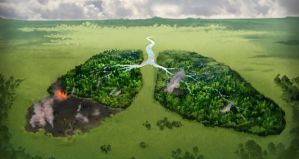 I was that child who jumped off a roof with an umbrella in the wake of Mary Poppins. I was that child who rode skull-rattling billycarts down deeply rutted, vertical hillsides. I had my arm in plaster age six doing a backwards flip off a jungle gym. At 19 I rode motorcycles fast and fearlessly and felt I was flying – especially at night under the stars . . .

. . . we can crash and burn in different ways. But whatever your circumstance, I believe if you change the way you see things, the things you see will change. These last dozen years of failing health, my nose pressed against the glass as others swoop and play, have led me to think if the Lung Fairy granted me one day perfect day, among the things I would do is paraglide off Coronet Peak in Queenstown in NZ.  I would fly. Instead, I have my books and music. And I can still fly.

If I wasn’t tethered to oxygen, I fear my old biker instincts might  have erupted in  a  mid life crisis and the buying of a BMW Goldwings,  as I was urged to do by the nurse who arrived daily on a Hog for a while to inject my stomach to dissolve a clot in my lungs. If it moved it was goodnight Barb. And they say bikes are dangerous . . .

“Courage is the price life exacts for granting peace, the soul that knows it not, knows no release . . .” Amelia proved that in life,  what counts is not what happens to you, but who you become as the result of what happens to you. Amelia makes me braver.

The wreckage and other research points to the theory that having  survived the crash in 1937 Amelia  had lived as a castaway on Nikumaroro,  a tiny atoll between Australia and Hawaii. Sonar images of the reef near the formerly named Gardner Island, have shown an object matching the dimension of the Electra lying under 650 feet of water. Waiting.

Click on the title ‘Finding Amelia’ if you want to say something.