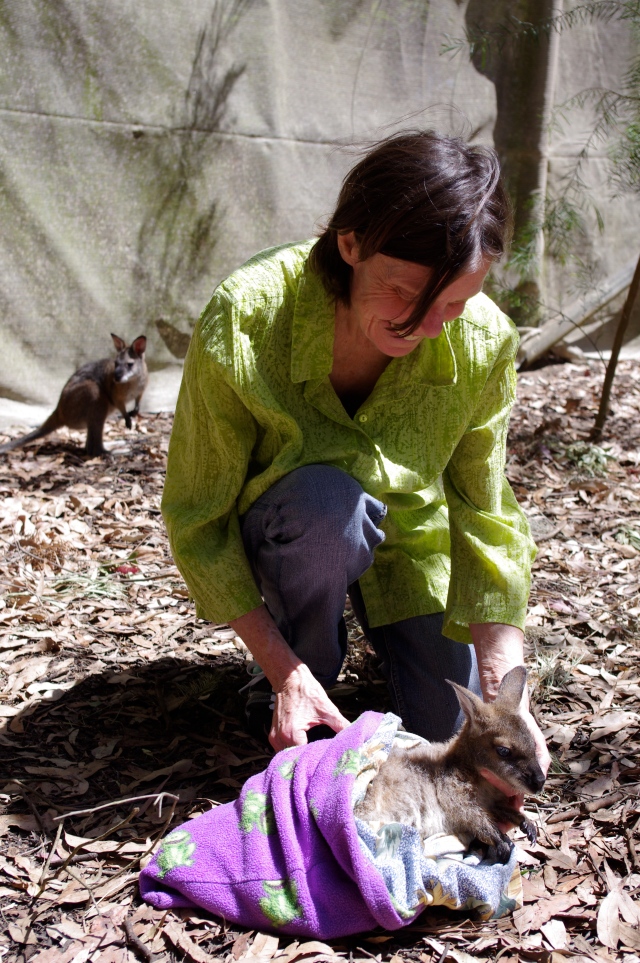 Barb tends to an orphaned joey.

It was after sunset in early spring. A clear night. I was scanning for roos along the Currarong Road, weary, as we were on the last leg of our journey back from Sydney that day. Six hours behind the wheel all up. I’d been humming lines from Paul Simon’s song about the Boxer: “ Lie-la-lie. . . in a clearing stands a boxer and a fighter by his trade and he carries the reminder of every glove that laid him down or cut him till he cried out. . .” when out of the corner of my eye I saw her. She seemed wrong somehow; skipping along the tarseal like a stone on a lake meant only one thing—she’d been hit. Just moments earlier. They didn’t stop.
I parked the car diagonally and shone the headlights on her. Frances crossed the road and the roo hopped and crawled into the mulga, lay on her back, legs sticking up in the air. Maybe her back was broken. She looked at us. There was blood on her face. She was silent. I turned off the car lights. The sky was ablaze with stars.
Her mob, back up the road a little, were watching—six pair of eyes trained on us.
Cars periodically shot by, not slowing, not stopping—110, 120kph–what hope had these creatures feeding along the highway to hell?
She shrugged off the old towels from our boot so Frances sat in the gravel, molested by millions of mozzies, and started to talk to her.
In the softest voice she said she was sorry.
“ She still with us?” I asked, before ringing Sharon at NANA.
“Don’t check the pouch if she’s alive,” the kind gravely-voiced Sharon told me, “not if you don’t know what you’re doing.”
Sharon sounded like she could manage BHP and come home and whip a tribe of kids into shape before saving the world.  “She can’t get up.”
“No. Righto,” she said, “I’ll send someone. “Now you know we’ll probably have to shoot her, but you needn’t stick around.”
I told her we were on the road just past Hammerhead with the parkers on.
“Don’t forget about us,” I said.
“No love, I won’t”. And I knew she wouldn’t, god bless her.
A mum in a people-mover was the only one of a dozen or so cars to stop and ask if we needed help. She had her two little boys in the back. “Right boys, put your belts back on, there’s nothing here to see.”
Mothering. We were to be taught a chilling lesson that night about a mother’s love.
The mozzies were thick as freckles on a redhead kid yet Frances just stayed with her roo.
“You’re doing good,” she told her.
Clouds of bloodsuckers drove me into the car where I asked the God of Lesser Things to ease this creature’s suffering.
Frances waited. There was no moon. It was August. I could hear her talking softly.
At last Chris and Kyla arrived. He long and brown and leggy and in stubbies; she small and soft and kind. The cavalry never looked so sweet. They swung their wagon round and in the headlights on the road we saw it – the Joey, still warm but having yielded to death while mum was panting in the bushes just metres away.
We just cried when we saw that perfect little creature left to die alone. Just outside the circle of our light.
“They do that,” Kyla said.
“They toss the Joey.”
She was holding the little brown leathery body about a foot long in her arms and I thought of Mother Mary and Pie Jesu – the haunting song Andrew Lloyd Webber wrote for Requiem after he saw a photo in a newspaper of a Vietnamese mother who had killed her child rather than let him suffer an agonizing death. It was wartime.
This small wild creature was hit by a car and she thought she was dying so she plucked her baby from her pouch and tossed it onto the road. She knew crueller fates awaited an orphan Joey as even now hungry yellow eyes watched from the bush and from the skies. It was wartime.
“We have to drag her out of the bushes and have a look at her,” Chris said.
He rubbed his stubble and his eyes were troubled but he backed himself.
“Either the police show up soon and shoot her or we have a look at her and see if she’s got a chance.”
Chris grabbed her tail and she fought back, rising up and clawing wildly at Frances and Kyla who managed somehow to get a towel over her head and quieten her down. Then she slumped to the ground again, beaten.
We moved across the other side of the road, standing four in a line, arms folded.  “The foxes’ll eat her alive,” Kyla said. “Are you prepared to stand here and wait, maybe for hours to see if she hops away?” We nodded, but I hoped not.
“It could be she’s in shock or she could have a real bad head wound,” Chris said. “We just can’t tell.
“Even if she makes it, flies could strike the gash over her eyes.”
We stood back and watched and she looked like a tortured Abu Ghraib prisoner with a towel over her head—standing proud and defiant somehow.

A P-plater sped by at over 100, spitting gravel, and we thought for one terrible minute she was going to bowl the roo.
“If people only slowed down,” Kyle muttered. “I mean she can see four people and two cars on a country road at night and yet she zoom-zooms past us.”
The mozzies were black on Chris’s long legs.
He took a moment to tell us that we should always check the pouches of dead wallabies and roos because the joeys could live up to four days after mum was killed.
“Don’t pull the Joey off, he said, “because you can break its jaw it’s clamped on so tight. Just cut off the nipple.”
Frances nodded gravely and I knew we’d be carrying a pocket knife in the boot from now on, along with Mercurochrome, towels, an old doona and some leather gloves.
Then the miracle happened, She shook off the towel and with a look across at us she hopped into the bush.
We weren’t going to shoot this one.
Strangers that we were, we cheered and hugged.