Both my parents died in April – and also in April many years ago, a best friend. A cruel month, the poem says, a month that ‘stirs memory and desire’.
I have found it so.

Shakespeare died in April. On the 23rd in 1616, the same date as Cervantes.

Fear no more the heat o’ the sun,
Nor the furious winter’s rages;
Thou thy worldly task hast done,
Home art gone, and ta’en thy wages:
Golden lads and girls all must,
As chimney-sweepers, come to dust.
— from Cymbeline

There is, in cruellest April, also, incontestable evidence of our nation’s deepest shame when in 1816 Governor Lachlan Macquarie wrote in his diary that he felt compelled, “to inflict terrible and exemplary punishments” upon Aborigines living on the outskirts of Sydney.

“In the event of the natives making the smallest show of resistance . . . fire on them to compel them to surrender; hanging up on trees the bodies of such natives . . . in order to strike the greater terror into the survivors.”

The soldiers carried out the NSW governor’s orders, hanging up on trees the bodies—Australia’s own Strange Fruit—and so the Appin Massacre of men, women and children, stains our nation to this day.

Bob Ellis died on the third day of April.

How can it still be Australia if Bob Ellis isn’t here, one commentator asked, speaking for the legion of us admirers who mourn his passing. A different stripe of government may have afforded Ellis a state funeral, as they did a trainer of racehorses. 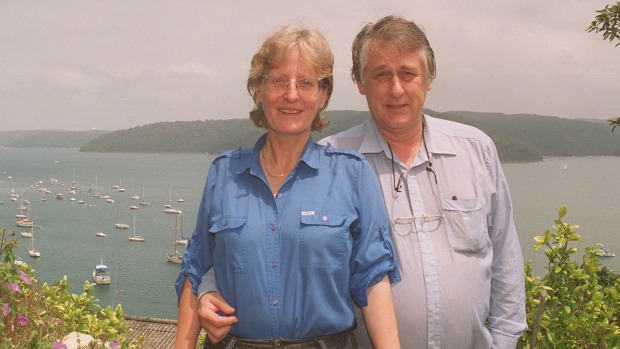 Writers Anne Brooksbank and Bob Ellis at Palmie. Together over 40 years.

A voice of the Left for generations, a student at Sydney University with  other shooting stars like Germaine Greer, Clive James, Les Murray, Robert Hughes and Barry Humphries, he lived a minstrel-like life as a strolling writer, on many payrolls. He knew penury.

But he hated Liberals and he had no truck with ‘pointless’ religion, this atheist son of a Seventh Day Adventist. He was a Lion of the Labor Party in Australia and as such the Leader of the Opposition, Bill Shorten,  was among those graveside to warmly eulogise his life.

It’s easy to agree with former South Australia premier, Mike Rann, that Bob was Australia’s greatest diarist, a mix of Boswell with a touch of Samuel Johnson and Hunter S. Thompson thrown in.

And the presence of Germaine Greer at that bushland cemetery put to the sword one enemy’s complaint that Bob Ellis was Australia’s leading misogynist.  (I think he was an equal opportunity hater).

His death is occasion to open again the once great newspaper,  National Times of 1985, May 3, and weep over his account of the Royal Commission into the British nuclear tests conducted on the Maralinga Lands in South Australia in the 1950s and 1960s.

Ellis’s article on the Wallatina hearings recounted ‘the worst story of all’ — Edie Milpudie’s harrowing account of herself and her family camping, in May 1957, on the Marcoo bomb crater.

She told of being ‘captured by men in white uniforms … forcibly and obscenely washed down, miscarrying twice and losing her husband who to prove to the soldiers he knew English, sang, “Jesus loves me, this I know. For the Bible tells me so.”

She told how the soldiers shot their beloved irradiated dogs.

At his best, Ellis, like Pepys, or Dickens or Henry Lawson—whom he most favours—would prove that not only was journalism the first draft of history, it could bristle with facts but still dazzle with great prose.

Bob’s voice was unique. He was called by the Sydney Morning Herald “a man of a million words”.

Deemed too rude to broadcast, here is Bob in conversation with ABC’s James Carleton.

Bob Ellis was a man of snarling insults and startling insights: On the 100th anniversary  of the Gallipoli slaughter, Ellis noted on his famous Table Talk Blog that perhaps WWI diggers were such good shots because they had practised killing Aborigines. What a blindingly self-evident but terrible and unbearable truth that might be?

Well before he was ill, Bob contemplated death and dying, in a lovely piece of writing lamenting the tragic loss of his sister. She was killed by a car three days before a long dreamed of letter arrived telling her she was accepted for air hostess training. Ellis turned away from God. He never turned back.

“My sister has been dead for forty-five years”, he wrote in 1999.  “I didn’t say much to her the last time we saw each other, in Stockton that December. I was nine, and she was twenty-two. I have tried to say things to her since, but I doubt if she can hear.”

“It’s important, I think, to get it said, and say it soon. To make peace, to kiss it better. No memorial indulgence, no golden chariot pulled by black horses with tossing manes through thinly falling snow will ever be as good as those clear words said, ‘I love you. I’ll miss you. It was good for the world that you were here.’”
— Bob Ellis

In addition to 20 books (one of them scandously pulped) and screeds of journalism, Ellis wrote nearly 30 plays and screenplays ranging from King O’Malley; the autobiographical Nostradamus Kid; the political mini-series True Believers; the acclaimed screenplay Newsfront,  and, my personal favourite, Man of Flowers.

Bob once said his idea of happiness was to sit alone, with a Chinese meal, and read Private Eye.

And so we have a  swallowtail butterfly on the verandah, an unusual sighting so long after the summer of 2016  officially ended with a Leap Year.   A weather record that has been kept for 30 years is broken. One autumn day this April it was 34 degrees in Sydney, or 93 in the shade, as the Yanks might say.

Will the blades of a  ceiling fan always remind me of Apocolypse Now?  Bob Ellis, at his best and at his worst, can put me in mind of Marlon Brando (from the waterfront to the jungle), that same dangerously silken slur and a wildness that some people have. An inner puma.  Bob hated charisma yet he exuded it. He railed against ‘charisma’ as something manufactured to sell JFK,  yet women found him attractive and men loved his company, heterosexual men like man-about-town’s  Rhys Muldoon, who tweeted this picture when Bob died.

Bob had a year in The Departure Lounge.

He arrived last April with the sad announcement on his  blog that he had perhaps only weeks to live. Weeks turned into months and Bob regained a bit of bloom. He was able to correct premature obituaries and throw a bit of gasoline on his famous feuds.

No hour was wasted.

He wrote about his dance with death from time to time  “the cancer diaries” in between excoriating Tony Abbott and what he called ‘the worst government since the invention of democracy in Iceland in 411AD’.

Bob’s last word was ‘magical’. He was on his death bed conversing with his oldest friend and long time collaborator Stephen Ramsay.

Bob had pressed Stephen to read How the Irish Saved Civilisation.

Ramsay asked him if he remembered Ireland. Their trip?

The flow of words had ceased.

Bob was the truest of True Believers. He never tucked in his shirt, straightened his tie or bent over.

I’ll miss you, Bob Ellis. It was good for the world that you were here.

• Rare live footage of one of the first anti rascism songs.

3 thoughts on “Another April death”